Why Are Men Less Flexible Than Women?

You are here:
HealthYoga 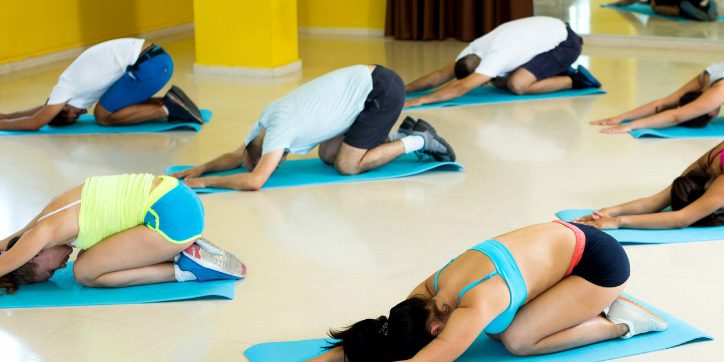 Haven Yoga & Meditation explains some of the scientific evidence and why men are seen as less flexible than women.

Women have always been seen as the more flexible gender, with a lot of men being too intimidated by their lack of flexibility to participate in activities which demonstrate this lack of flexibility, such as yoga. Sadly, due to this, many believe that yoga is only for women. This is a completely false belief as yoga can be done by people of any gender. However, why is there a perception that men are less flexible than women?

There are many theories into why women are generally more flexible than men. Studies have shown that men usually focus on working out in a way that can lead to shorter, tighter muscles. Men are more likely to focus on heavy strength training without balancing this out with training that lengthens the muscles, like yoga. Due to this, men tend to have bulkier muscles that tend to be less pliable.

There are some biological differences that also cause men to be bulkier and less flexible than women. Men have over 10 times the amount of testosterone that women have, leading to bulkier and less flexible muscles. This is largely due to the fact that testosterone increases muscle mass by increasing the size of the muscle fibres and increasing muscle protein synthesis. Women have higher levels of oestrogen in their bodies, leading to wider hips that allow greater movement and flexibility in the pelvic region, hence they sit in cross legs more easily.

Scientists have theorised that one of the reasons women are more flexible than men is due to the biological evolution of their bodies for pregnancy and childbirth. Our bodies have been under constant change and evolution, and this has allowed pregnant women to stay mobile without the weight of a baby causing any falls. The human body must change in many dramatic ways for a comfortable pregnancy and these changes completely alter a women’s posture and stability. The natural reinforcement and curvature of the lower spine are key to maintaining normal day to day function during pregnancy. It is theorised that these natural advantages used during childbirth are part of the reason women are often more flexible than men.

There is also a distinct gender difference within the human body. In general, women are typically more naturally flexible than men, partly due to the genetic and biological makeup of their connective tissues. Oestrogen receptors are known to be present in fibroblasts of tendon and ligaments and are believed to have a stimulating effect on fibroblast proliferation and collagen synthesis. This allows women to have increased flexibility over men. The weight distribution of our bodies is very different between women and men. Women have a lower weight distribution around their hips and thighs, allowing for a lower centre of gravity and giving a stability advantage. However, it is believed that this has more of a psychological impact as women generally have fewer issues balancing during stretches. It is believed that this low centre of gravity allows women to balance better than men in everyday situations, allowing for them to believe they are able to do more flexible activities than men.

Despite the evidence seen that women are more flexible than men, this does not mean that men can’t improve their flexibility. Attending regular yoga classes that provide options for the male body with a professional and experienced yoga teacher, will allow men to become just as flexible as their women counterparts.

If you are located in Murarrie, Cannon Hill, Morningside, Balmoral, or Tingalpa, stop by our yoga studio at 16 Queensport Road South, Murarrie.

Our teacher Jane Toohey is a level 2 trained Brisbane yoga teacher. With many years’ experience, working with both men and women. She runs a class every Thursday tailored for male bodies, at the studio in Murarrie. Book A Session today!

Start the New Financial Year with a Relaxed and Mindful Workforce
June 28, 2022

How to Manage Stress through Yoga and Meditation
May 25, 2022

5 Reasons Men Should Practice Yoga and Meditation
May 25, 2022

The Benefits of Community when Practising Yoga at your Local Yoga Studio
December 21, 2021

How to Incorporate Mala Beads in your Meditation
October 13, 2021